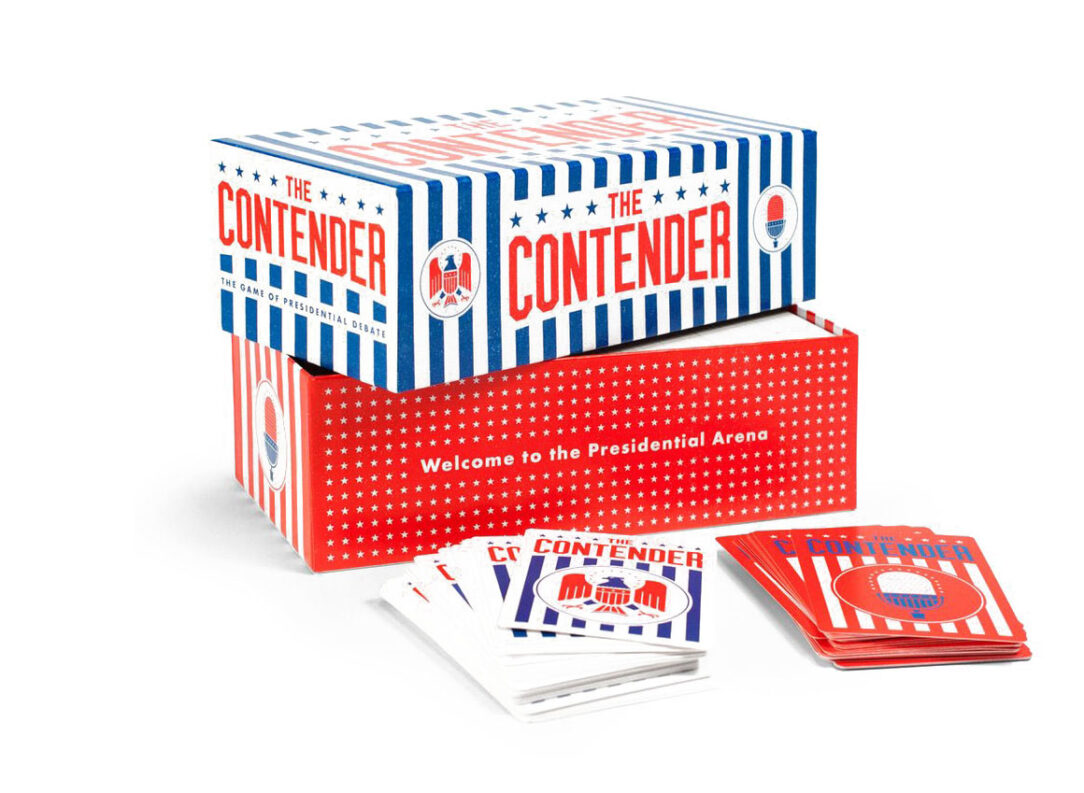 Note: This review is not yet complete. This post will be updated with more information, once I’ve had a chance to play it through a few times and thoroughly review it.

The Contender is a great party game to play with your friends. Topically, it’s a civics game patterned after Presidential debates. Conceptually, it’s a spin on Cards Against Humanity.

It’s fun, and it should be extra fun for anyone who can appreciate the historical references to the many Presidential candidates featured on the game cards.

Contents of The Contender

The Contender: The Game of Presidential Debate is packaged in a small box. You can see a photo of the contents above.

The box also contains a simple, one page set of instructions. The rules, which we’ll get to in a moment, are quite simple. But there’s something refreshing about a game that can be explained with one tiny piece of paper.

The cards themselves are of a good quality. They’re easy to shuffle, and they don’t stick together. They feel durable enough to last through a good many drunken rounds of play.

Gameplay in The Contender

Like I mentioned before, gameplay in The Contender is straightforward. You can play with as many people as you’d like (within reason). One person is the moderator, and everyone else is a candidate.

The candidates are each dealt five argument cards. Each of the argument cards is based on an actual quote by a Presidential candidate. For example, there’s a card called “YEAAAUUGHHH!” after Howard Dean’s infamous scream the night of the Iowa caucuses in 2004.

The moderator then draws a topic card. For example, one topic card is called “The Media.” The card explains that the candidate has been criticized by the media for an inappropriate comment, and the candidate is asked if they blame the press for these attacks.

Each candidate takes turns responding to the question using their argument cards. The argument cards fall into one of three categories – distract, attack, or fact.

In each turn, each candidate has to use three cards. You can string them all together in one response, or you can use one or two cards in your first response and then use the other ones after the other candidates have gone.

After everyone has played their three cards, the moderator picks the candidate who had the best response and awards them the topic card. That player becomes the moderator, the old moderator becomes a candidate, and play continues. When you’re done – which is whenever you decide that you’re done – the player with the most topic cards wins.

An Example Turn of Play

So, as an example, let’s take a look at the previously mentioned topic card, “The Media,” and how a candidate could respond. In the picture above, you’ll see three cards that a candidate could play as a response.

First, there’s a “Distract” card called, “Never give up; never surrender.” It comes from a quote by John McCain in his speech at the 2004 Republican National Convention. Because when the media attacks, you stand up and never flinch.

Then, we’ll play another “Distract” card, “Think outside the box.” This comes from a quote by JFK in a speech to the General Assembly of the United Nations in 1961. Cause sometimes you’ve got to think outside the box, and the media is just trying to keep you there.

Finally, we’ll play the “Attack” card, “Enough is enough.” This is based on a response Ross Perot gave to a question during a Presidential Debate in 1992. When asked about education, he gave a rambling answer that included an anecdote about how a boy kept a chicken in his bathtub and used that as an excuse to cut school. And that’s absurd. Or maybe his response was absurd. Either way… enough is enough.

Anyway, you get the idea. As in Cards Against Humanity, you string together cards to build responses that are interesting and comical. The only thing you “have” to say is the title of the card, but things get better when you add a little explanation and act out the cards a bit.

The Good, The Bad, and the Ugly

I will edit this post soon to include some thoughts about what’s good about it and what’s not.

The Verdict on The Contender

After I’ve played this a few times and edited this post with some thoughts based on my experience, I’ll render a final verdict. But in the meantime, I feel confident enough to say that this is a good buy. I’m looking forward to having some friends over soon and playing it with them.

Social card games like this are fun. As a civic educator, I love anything related to politics. Combining a fun game with a political topic seems the best of both worlds.

I’ve read about people using this game with their students. I suppose it could have a purpose. It would be great to play with a club, like Model UN, Youth in Government, or High School Democrats/Republicans. But I’m not sure if I would use it with my regular social studies students.

I think the real value here is as a party game to enjoy with your friends who also have an interest in politics. And there’s nothing wrong with having some friends over and having a good time. We all need to let loose a little in order to be at our best when we’re at school.

Head over to Amazon and pick up a copy of The Contender today.

If you’re looking for some other board games about government and politics, check out this list of civics board games. While The Contender isn’t the best option for use with your class, there are a couple that are perfectly suited for classroom use.

And if you’re looking for other ways to make your class exciting, check out this list of suggested ways to teach civics in a fun way. Game based learning is one of many ways to make things more engaging for your students.