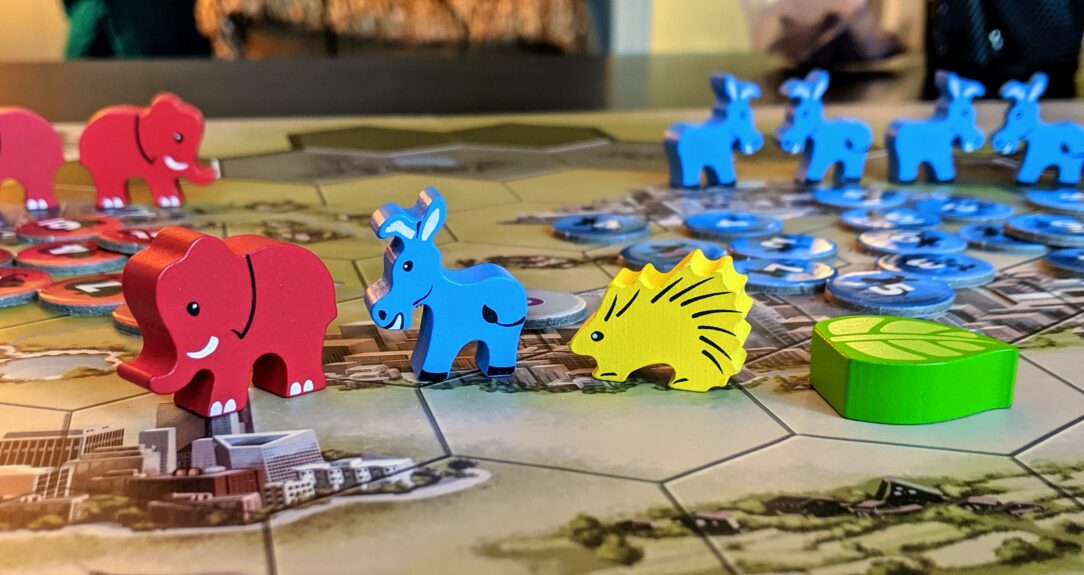 Review: Mapmaker the Gerrymandering Game is a Fun and Educational Board Game

Mapmaker: The Gerrymandering Game is a simple, thoughtful, and strategic board game. It also happens to be educational, too, but that’s just an added benefit.

I saw this game on the shelf at the mall a few weeks ago, and it immediately caught my eye. It got me thinking about what other board games are out there that relate to civics, which led me to share this list of civics and government board games.

My first impression of the game is that it is great. What I love about Mapmaker is that it’s first and foremost a solid game. It’s centered on simple, straightforward gameplay with clear strategic elements. The components are well designed and high quality.

At the same time, it is a great tool to help students understand the mechanics of gerrymandering. But despite its educational value, it doesn’t scream “classroom” or “school.” It has the vibe of a real game that will appeal to anyone.

Contents of Mapmaker: the Gerrymandering Game

I unboxed the contents of Mapmaker: the Gerrymandering Game, and you can see everything in the image above.

There’s an instruction manual, a game board, two bags of game pieces, a set of bags to hold the pieces, and two cards of perforated tokens. You can see the tokens and game pieces laid out on the open board below.

The components of the game are great quality. The artwork on the game board is very nice, and the pieces are all of a good weight and quality. None of it feels cheap or fragile.

To set up the game you need to put the tokens face down and shuffle them, kind of like you would with dominoes. I was a bit worried that the cardboard tokens might be too flimsy, but that wasn’t the case. They have enough heft to them that they can be shuffled around without bending or bunching up on each other.

The rulebook is very detailed, and there are plenty of illustrations to make sure everything is clear. It even contains some educational information on gerrymandering, if you’re not familiar with the topic.

Gameplay in Mapmaker: the Gerrymandering Game

To start the game, the tokens are shuffled and placed on the game board. You can play with up to four players, and you use more space on the board with each extra player.

Once the map is set, gameplay is simple. Players take turns placing the black borders on the map, and eventually these borders are used to close off districts. There are a few basic rules about what you can and can’t do, and when a district is created it’s awarded to one political party or another.

The goal is quite simple – win more election districts than the rest of the players.

Solo Play with Mapmaker is Fun and Challenging

After I opened up the box, I wanted to try the game out. I didn’t have anyone to play with at the moment, and I figured I’d just make do and get a feel for the mechanics. But I was pleasantly surprised when I read through the rulebook and there were specific rules for a solo version of Mapmaker: the Gerrymandering Game.

You can see the result of the simple version of the solo game above. You set up the board with two colors, and you create the most lop-sided map you can.

You can see in the picture above that I made a very blue map, with six blue districts and one red district. This didn’t take too long, and it was very easy. But it was a great quick introduction to the game. It would also be a great way for a student to see incredibly tilted a map can be if gerrymandering runs amok.

The Advanced Version of Solo Play

But there’s also an advanced version of the solo game, and in this one I didn’t fair so well. The objective here is to divide the map as evenly as possible, and create only districts that have the same number of voters from each party.

As you can see above, I managed to make four evenly balanced districts. But there were three large pockets of voters that I couldn’t balance out.

I suspect that you will be unable to win the game at times, depending on how the tokens are dealt.

Ultimately, I found this version to be sufficiently challenging. I spent a good while puzzling out different options. I love figuring out puzzles and problems, and this gives your brain a lot to chew on. It’s definitely challenging enough to make me want to reshuffle and try again.

I definitely think this game has the potential to be used in the classroom.

You can read a more in depth post on how to teach gerrymandering with Mapmaker here. But in the meantime, see a few thoughts below.

Solo Play. Have your students complete a round of solo play to see how easy it is to tilt the map when you control the whole process. To make it even more clear, have them first create districts for one color and then – without reshuffling the board – do the same for the other color.

Small Groups. Since up to four players can play at once, you can have groups of four play. If you have several copies of the game they could all play at once. If you only have one, you could cycle through the game and other activities over the course of several days. Have students pay particular attention to strategy and things like packing and cracking voters.

Play Blind. One suggestion for how to eliminate gerrymandering is to require that districts are created without looking at voter data. You can simulate this by having your students play the game (either solo play or regular) without flipping over the tokens. Once all of the districts are created, flip the tokens over to reveal where the voters are.

Advanced Solo Play. Once you’ve taught your students about this, you could have the game available as a bonus activity for when students are done with their other work. Have them play the advanced version of solo play and keep a high score board. Students can take pictures of their completed game boards and compete to see who can do the best.

The Final Verdict on Mapmaker

There’s no doubt about it, Mapmaker: the Gerrymandering Game is a winner.

It’s a quality board game with sturdy and pretty components. Gameplay is straightforward, but its definitely strategic enough to make it challenging and interesting. There’s an element of chance in the dealing of the tokens that enhances replay value, since every game board is going to be different. I also really liked the flexibility of playing solo or with a group of up to four.

But on top of being a great game, it has a lot of potential as a learning tool. There are a myriad of ways that you can use it in your class, and with the proper amount of support this could be the perfect way to help your students understand the concept of gerrymandering.

I would highly recommend Mapmaker: the Gerrymandering Game – both for your home game room and for your classroom. If you’ve played it or used it in class, I’d love to hear what you thought about it. Leave a comment below, or leave a comment on our Facebook page.

Head over to Amazon and pick up a copy.

If you’re looking for another innovative way to teach gerrymandering, check out The ReDistricting Game. This is a computer game that similarly simulates gerrymandering. It’s a bit more complex than Mapmaker, but I’ve successfully used it with my students in the past.

You should also check out this popular post on how to teach government in a fun way. Game based learning is one of several ways to liven up your social studies class and make civics exciting.

Finally, remember that games like Mapmaker can be fun – but they’re also proven ways to teach civics. Simulations, including video games and board games, are one of six proven practices for improving civics education. You can read more about these research based methods for teaching civics here.