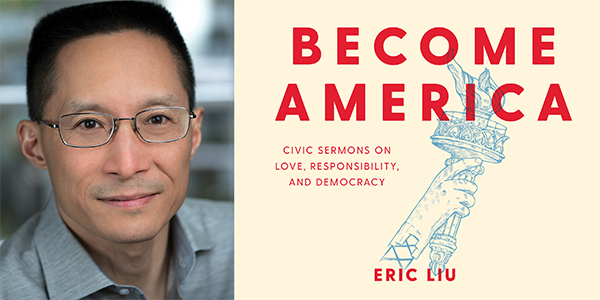 Review: Become America is an Optimistic Call to Arms in a Dark Age

I first heard about Civic Saturdays when a news story came across my feed a couple years ago. I wrote about it in a weekly round up at the time. The idea intrigued me, but I never got around to following up on that thread.

Around the same time, I also heard Eric Liu speak. He was the keynote at the NEA Leadership Summit, and his message really resonated with me. I kept meaning to get a copy of his book, “You’re More Powerful Than You Think: A Citizen’s Guide to Making Change Happen.” But again, for one reason or another, it never happened.

And so when I saw his new book, Become America: Civic Sermons on Love, Responsibility, and Democracy, pop up in my suggested reading list on Amazon, I guess the third time was the charm. I grabbed a copy, I read it, and I loved it.

Keep reading for a synopsis of the book, a review of the things I liked, and some thoughts on its implications for teaching civics. But if you want the tl,dr; version:

Become America by Eric Liu is a great book and it will resonate with anyone who considers themselves a proponent of civics education. It reminded me in some ways of On Tyranny: Twenty Lessons from the Twentieth Century. It was equally emphatic in its call to action, but it was much more optimistic and upbeat in its tone.

You can head straight to Amazon to get your own copy of the book, or keep reading for the review. And be sure to scroll the end and leave your own thoughts in the comments.

The Structure of Become America

To understand the structure of Become America, you first have to understand what Civic Saturdays are.

Civic Saturdays are what Eric Liu calls the civic analog of church or a faith gathering. They are gatherings designed to help the participants reflect on the nature of citizenship and civic life. They’re structured much like a church service, with readings, singing, and a sermon of sorts.

The book is, quite simply, a collection of 19 of those sermons.

As Liu explains in the preface, there is no logic that drives these nineteens essays, nor is there a structured argument that they are making. But they do touch on a series of themes. There is clearly a connection between them, even if it can’t be boiled down to a line of reasoning.

Some of the Contents of Become America

Ultimately, reading this collection feels like taking a stroll through Liu’s brain. You get a real sense of his worldview and how he hopes to help stitch things back together.

Reading it is also like taking a trip back through time. In many of the essays, Liu references events as they are unfolding. In late 2019, the first two years of the Trump Presidency may seem like an unhappy blur. But as I read these, I was repeatedly brought back to a moment in time, remembering the specific details and emotions of that moment.

Given the disjointed nature of the collection, it would be hard to summarize the entire book without this post becoming endless. So I’ll briefly touch on two of those recurring themes.

There is, as you would imagine, a focus on citizenship and the role of the citizen. The citizen for Liu is not the person who is legally defined as such, but is a person who is part of a community. At several points he explores the idea of citizenship as responsibility. We aren’t just entitled to rights, we’re obligated to be a part of something.

There’s another strong emphasis on civility. In one story, he recounts how he met with Glenn Beck and they tried to find some common ground. He argues that we need to learn to disagree peacefully and work out how to actually debate our principles instead of digging in and attacking our opponents. He similarly touches on the idea of redemption and that it is possible for us to sew up some of the wounds that have been opened in the past few years.

What I Liked About Become America

One thing that I loved about the book was the structure. Each sermon began with several quotes, and these quotes were woven through the essay. Some of these were legal documents, like the 14th Amendment. Others were famous works and speeches, like de Tocqueville’s Democracy in America. And still others were just lesser known pieces that were relevant to his argument.

On the one hand, it’s clear from this technique that he really is drawing on the structures and practice of preaching. But his ability to bring together such an eclectic choir of voices to support his argument was compelling. Some of the quotes and references also added to my reading list of things to explore.

Eric Liu Sets an Optimistic Tone for the Future

Another thing that I liked about Become America was the tone. These are definitely written in the early years of Trump’s presidency, and it’s clearly a dark time for him and his readers. But he is not pessimistic. Rather than focus on how bad things have gotten, Liu is genuinely optimistic and hopeful.

This stands in stark contrast to Tim Snyder’s book, On Tyranny. While I enjoyed that and found the argument resonant, I was a bit troubled by the tone. It was a tad apocalyptic, focusing on all of the things that have yet to happen but could go horrifically wrong in the years to come. Liu is instead focused on all of the things we can do right in the next few years to help set a new course for our ship.

Finally, this is an easy read. The structure of the book, individual sermons, is great for casual reading. Each is short, and you can neatly break the book down into logical 15 or 20 minute chunks. But it all flows so easily, you could also read it in a weekend. It is available as an audio book, and I’m considering getting a copy on Audible so that I can give this a second listen on my way to work.

As a civics teacher, I’ve thought about many of the themes and questions that he raises. Throughout the book, I would often find myself thinking that his arguments seem vaguely familiar. I had seen many of them before. But he crystallizes them into great little nuggets of wisdom that helps bring clarity.

I’m intrigued by the idea of his civic seminary. There is certainly something to be said for the structure of the essays and the use of quotes to frame each argument. With a little tweaking, I feel like there’s a great professional development for civic educators in here somewhere. At the end of the day, we are the missionaries and proselytizers for American democracy. But social studies teachers don’t receive a lot of preparation for that role. Reading this book is a good start.

Liu’s politics do come through pretty clearly in the book, so I’m not sure how likely you would be to use chapters from this in your class. There are certainly some passages that could be useful, but you’ll have to pay close attention to how you frame things. I think the real value here is in helping you, the teacher, reflect on American democracy and then think about how you can create appropriate learning opportunities for your students to do the same.

I thoroughly enjoyed the book, and I found it very thought provoking. This will go on my list of things to read a second time, possibly as an audio book.

Reflecting after a first reading, I feel a certain vagueness – no doubt due to the meandering nature of the collection. But I have a very clear feeling of appreciation and gratitude. I enjoyed reading it, and I feel better for having done so.

You can head over to Amazon and pick up a copy of Become America: Civic Sermons on Love, Responsibility, and Democracy. It’s also available as an audiobook, and you can get this book free when you start a free trial of Audible.

Have you read Become America, or do you have plans to? I’d love to hear what you thought. Drop a comment below, or head over to the Facebook page.

Next up on my reading list is No Citizen Left Behind by Meira Levison. It’s a book about the civic empowerment gap, and I picked it up after it was referenced in Flunking Democracy. I’ll share some thoughts about the book in a couple of weeks, so subscribe to our newsletter if you want to hear about it.