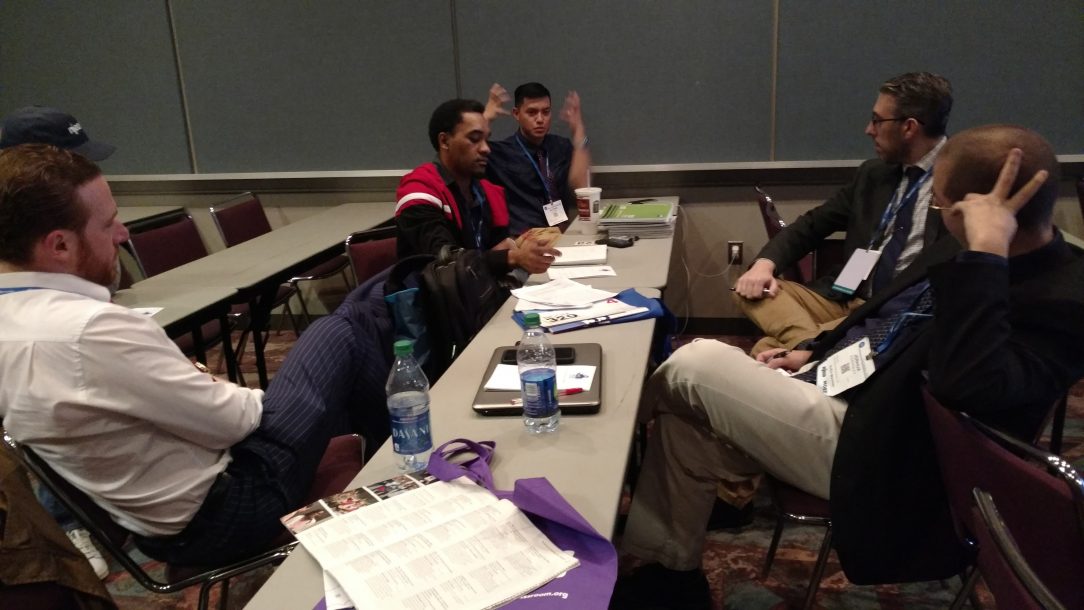 Civics Education at the NJEA Convention

By Brian in Classroom Deliberations, Solutions Civics, State Board of Education
No comments

It’s Saturday, and I’ve finally had a chance to sleep and recover from a busy few days at the NJEA Convention in Atlantic City. I presented two civics education workshops while I was there, and I made a stop at the meeting of the New Jersey State Board of Education.

Here’s a quick rundown of some civics education takeaways from the convention.

On Thursday, I assisted Harry Pozycki of the Citizens’ Campaign with his presentation, “Solutions Civics: Preparing for 21st Century Citizenship.” We were joined by Ellen Clarkson and Steven Galante of the Citizens Campaign as well.

During the workshop, Harry articulated a vision for teaching civics from the municipal level. We handed out the Citizens Manual, a brief text from the Citizens Campaign about the rights of citizens and the power centers of local government. Harry then explained the resources provided for teachers to implement Solutions Civics, including a set of sample lesson plans.

I wrapped up the presentation by talking about six unique characteristics about Solutions Civics that makes it appealing to teachers:

You can read more about Solutions Civics in this earlier post, and you can also read here about the Civic Pledge and its use as a tool for character education. The Citizens Campaign is looking for teachers to pilot the new version of Solutions Civics, so if this interests you and you missed the workshop then drop a note in the comment section below or send us a message on Facebook. I’d be happy to put you in touch with their staff.

On Friday, I taught a session on C-SPAN, “Teaching Controversial Issues with C-SPAN’s Classroom Deliberations.”

In this session, I provided an introduction and overview of C-SPAN and the resources it has to offer for social studies teachers. I explained what Classroom Deliberations are, and then I used the most recent lesson to model for the participants how they work. We went through a lesson on gun control, and the lesson wrapped up with a mock congressional hearing.

You can read more about C-SPAN’s Classroom Deliberations here, and you can also read more about how to use a mock Congressional hearing in your class here. I’m working on a more thorough post on this workshop, with a link to the slideshow.

Thursday’s Meeting of the State Board of Education

Every year, there is a meeting of members of the State Board of Education at the NJEA Convention, where three members participate in an open question and answer session. This year, the participating members were President Arcelio Aponte, Edithe Fulton, and Kathy Goldenberg.

Two years ago, at this Q&A session, the former President of the Board of Education, Mark Biedron, had expressed that the State Board wanted to ensure that all students were “college, career, and citizenship” ready. They were preparing a new strategic plan, and this would reflect a greater emphasis on civics education. At that meeting, I asked a question and Mark Biedron made a commitment to civics education. Subsequently, I have spoken with the State Board and Department of Ed on numerous occasions about how to do this.

Unfortunately, Mark Biedron is no longer the President of the State Board. So, this year, I asked the new President a) whether he will remain committed to civics education and b) what is the status of the new strategic plan. He seemed generally in favor of civics education, but the new strategic plan will be placed on hold until the new Governor is inaugurated and a new Commissioner of Education is installed.