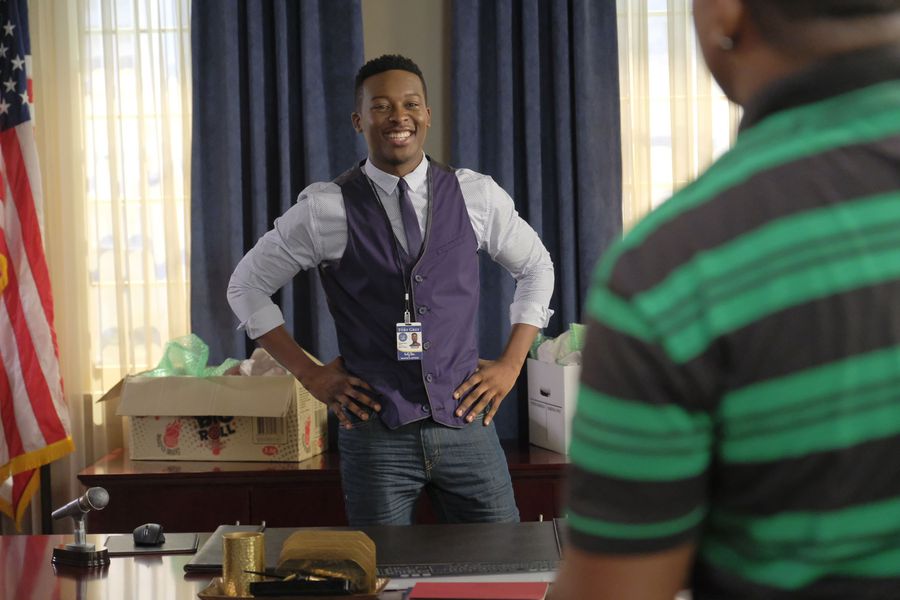 Teaching Civics with Episode 3 of The Mayor: Buyer’s Remorse

The Mayor is a new sitcom on ABC featuring a young rapper who decides to run for mayor as a publicity stunt. He doesn’t just end up helping his music career – he ends up winning.

The show turns out to be a good vehicle for discussing civics and government with your students. It’s worth watching some of it in class or having a discussion after you students watch it at home. The show really found its stride in the second episode, which is full of useful lessons for a social studies class.

Today, we’ll explore the third episode of the show – “Buyer’s Remorse” – and identify some civics and government themes worth discussing with your social studies students.

As the third episode opens, we learn that Courtney’s approval ratings are down. In the tanks. It turns out that people may have voted for him because they were outraged at the system, but they don’t really trust that he’s going to get anything done either.

He’s determined to show them that he can get stuff done, so he sets out on a plan to create covered bus stop benches. These will help keep the residents of Fort Grey dry while they’re waiting for the bus. It’s a perfect project that makes the lives of the citizens better.

But, unfortunately for Courtney, politics gets in the way. His nemesis on the city council, Ed Gunt, holds things up. He’s determined to stop Courtney’s project in its tracks, and he hopes to wait out Courtney’s term and defeat him in an election rematch. Ed works his connections inside the city government to frustrate Courtney’s efforts at every turn.

Eventually, the Mayor comes up with a great idea. If he can make it seem like the he and Gunt were working together on the covered bench idea, he can back him into a corner. Watch the episode to see how this little stunt works out.

The Mayor’s project – the covered bus benches – becomes a good vehicle for discussing some interesting themes and ideas in politics. Here are a few that you might want to explore with your class.

From the get go, this whole policy is driven by politics. Courtney is worried about his poll numbers, and he decides he needs to do something. Gunt is opposed to it, not on the merits, but just because it’s politically advantageous to him. It’s questionable whether anyone is working for the greater good of Fort Grey, or whether they’re just working for their own personal good.

This is an important reminder that government and politics are related and intertwined – but not synonymous. Policy questions and differences are often political in nature. You could use this lens to think about all kinds of policy differences at the state and federal level.

Good Journalism Puts a Politician on the Defensive

There’s an interesting scene in this episode where Courtney decides to go on a television show to be interviewed. In his eyes, this is a way to communicate directly with the voters and get his message across. He quickly learns that political journalism is not so easily manipulable. He’s put on his heels by the interviewer, and then he gets hit with a combative call in from Council President Gunt.

This is a reminder of the potential of good journalism. In an interview, the journalist should be driving the conversation and asking probing questions to put the interviewee on the defensive. By contrast, short videos and sound bytes that fit into our collective attention span allow a politician to make a quick political point without really engaging in the conversation.

But a good question to ask is – how vibrant is this type of journalism? There are still some good national shows, but does this happen in your community at the state or local level?

In this episode, we get a really good illustration of the politics of opposition. Ed Gunt is really clear about his motives. He wants Courtney to remain unpopular so that he will lose his re-election – and Gunt can swoop in and claim victory. While this seems like a good political move, it’s clearly bad for the city as a whole. The covered bus benches are a useful public good, and they’re being opposed for purely political gains.

This is a good stepping stone for talking about federal politics over the last few years. When President Obama took office, the Republicans were pretty clear about their motives. They wanted to oppose everything he planned to do in order to drive down his approval rating. Likewise, when President Trump took over, the Democrats were united in their opposition to pretty much everything he wanted to do. In each case, the parties are playing to their base – but at what point does this become self-destructive for us as a country? And how do we change that?

At the very close of the episode, Courtney has succeeded in installing coverings for the bus benches. He’s driving by a constituent waiting for the bus, and he seems pleased about his success. Then, she steps in a puddle – and she has something else to be angry about.

It’s a good reminder that people have short term memories. They are generally more inclined to focus on the here and now than the past – or the future. One of the frustrating things about government is that it can be a thankless job, and one of the hardest tasks of a politician is convincing people that their lives will improve if they vote.