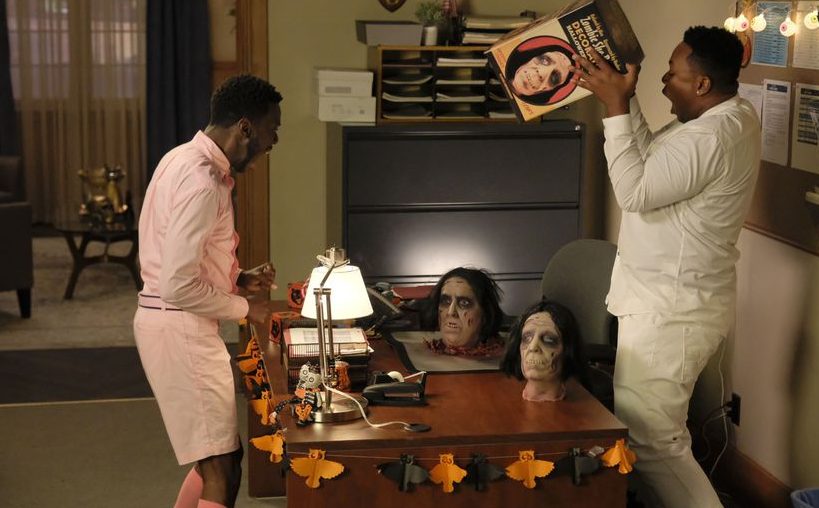 Teaching Civics with Episode 4 of The Mayor: City Hall-oween

By Brian in ABC, Television, The Mayor
One comment

The Mayor is a new comedy on ABC. It features an aspiring rapper who enters the race for mayor as a publicity stunt. He doesn’t just end up boosting his music career – he ends up winning the election.

The show turns out to be a good choice for discussing politics with your students. It’s worth watching select episodes in class or assigning it for homework. The show really found its stride in the second episode, which is full of useful lessons for a social studies class.

Today, we’ll take a look at the fourth episode of the show – “City Hall-oween” – and point out some civics themes worth discussing with your students.

In this episode, it’s Halloween – which appears to be Mayor Rose’s favorite holiday. He and his friends are planning their costumes and playing pranks on each other. But while he’s riding around the city, he runs into a kid who isn’t as happy.

The city is too dangerous, and his mom won’t let him go out Trick-or-Treating.

Later, Courtney attends a press conference with the police commissioner, who gives the city a stern warning about how to avoid danger on Halloween night. Courtney is so incensed with this negative outlook that he decides on the spot to announce that he’s going to throw a big Halloween party at City Hall for the kids in Fort Grey.

The police commissioner is none to happy, but the Mayor and his team move forward with the idea anyway. They decorate city hall, some antics ensure, and there’s a great party. Or what seems like a great party until Mayor Rose gets the news that there’s been a spike in criminal activity throughout the city.

He’s sad and dejected because in his mind this party was going to fix everything. Clearly, it didn’t. But when a group of parents show up at City Hall the next morning to thank him for throwing the party, he realizes that it’s ok.

Throwing more police officers at the problem and instituting a curfew seemed like the easy thing to do, but that’s not what the community wanted. They wanted their kids to have a good time. And so instead Courtney learns from this that he ought to listen to the community, and he establishes an advisory council that includes police officers, parents, and other community members.

Civics and Government Themes In This Episode

The central theme of this episode is crime and public safety. I was a little worried at times about the direction the episode was going, and whether or not I’d like the ending. But I ultimately I think it ended up in a good place and raised some interesting questions and ideas along the way.

How Do You Deal With Crime?

Crime is certainly a primary concern of municipal government. When I ask my students at the beginning of the year, “What is the purpose of government?” someone always says to protect us and to ensure law and order. Apparently, without the police it would just be the purge outside. I guess they’re a little Hobbesian.

At the beginning of the episode, two alternative solutions are juxtaposed. On the one hand, the police commissioner is recommending increased visibility and enforcement. On the other hand, the Mayor is suggesting an event to engage the community in a safe and enjoyable way.

Towards the end, even Mayor Rose contemplates giving the police department more resources and increasing the number of police on the streets. This is the simplest governmental response to crime, and it’s often suggested as a policy solution. But the downside, which he complained about early in the episode, is that more police also means more policing.

I don’t expect the show to solve the conundrum of crime, but I think what it does a good job of illustrating is the Mayor’s own conundrum. He realizes that crime is a problem and he wants to do something, but he’s frustrated at his inability to solve it in an immediate and tangible way. So he struggles with his choices. It’s not so easy when he’s in the seat of power.

At the same time, this is a potential launching point for a larger discussion of crime and policing in your own community. How do students feel about it? Do they feel their local government is taking the right course of action?

One of the most valuable lessons in this episode was to keep things in perspective and measure things appropriately. When there is a lot of crime on Halloween night, Mayor Rose is upset. He thought that his dope party would fix the whole problem.

But that’s unrealistic, and if that’s the yardstick by which you measure success you’ll always fail. In this case, the response from the parents was the appropriate measurement. They were happy. They felt served by the government and felt listened to by their elected officials. That sounds like success to me.

I think this episode would be great to use in the early stages of working on Project Citizen. When I engage my students with this or other kinds of project based learning, they always want to think big. Then they get scared of how big the problem is, and they feel like they can’t accomplish anything.

If the problem we want to address is crime, we can’t eliminate all crime. So why bother? My kids always struggle with this kind of relativism, and it makes it hard for them to really think about potential policy solutions.

The lesson here is that you don’t have to eliminate all crime. If you can do something that works towards the goal, then that’s enough. And you have to use the proper tool to measure whether or not you’re making progress. In this case, measuring criminal activity is not the right yardstick at all.

Elected Officials Ought to Listen to People

Finally, Mayor Rose’s epiphany at the end is an interesting discussion point. He figures out that government should listen to people, and by doing so it can determine what it should be doing.

How often do elected officials in your community listen to their constituents? And how often do they really listen to them as compared to setting up a venue for them to vent? It’s easy to create the image of listening without actually doing so.

Talk with your students about this and see how they and their parents feel.

What Do You Think Of This Episode?

Don’t forget that you can stream the show on ABC or Hulu, and you can purchase episodes for download at Amazon.

1 comments on “Teaching Civics with Episode 4 of The Mayor: City Hall-oween”