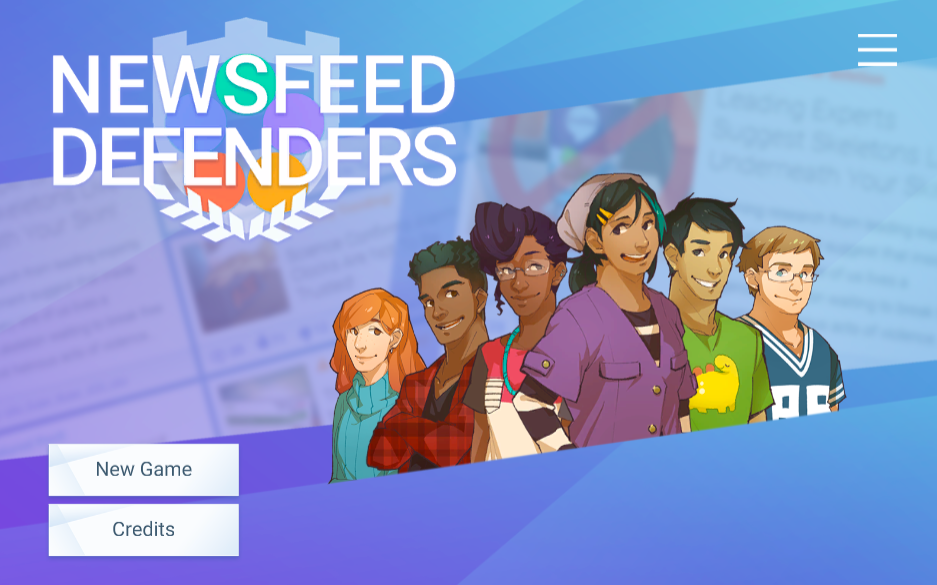 Review of NewsFeed Defenders, an iCivics Game About Media Literacy

NewsFeed Defenders is a game by iCivics about media literacy. In this review, we’ll take a look at how the game is played, the teacher resources available to use alongside it, and what’s great and not so great about the game.

NewsFeed Defenders is a good introduction to an important topic. Through the game, students will become familiar with some of the key aspects of good journalism. They’ll definitely be able to spot some of the red flags about fake news and misleading posts.

Gameplay in NewsFeed Defenders by iCivics

The premise of NewsFeed Defenders is that you are a member of a website Newsably – and you help make it the best possible source of information about a particular topic.

To get started, you choose one of the six avatars to be your character and you select a topic. I selected “Health and Wellness.” The other two topics were about student life and about sports. Most students should be able to find something at least mildly interesting to them.

From there, the gameplay largely revolves around the screen above. It represents the website, and you can see the feed of stories that appear on the righthand side. Your job is to investigate them and decide whether they should remain on the site.

Every action you take requires time, and when you’ve used up your allotment of time for the day you go to sleep and move on to the next day.

When you click on a story, you’ll see a title, an author, a source, and a little blurb that summarizes the story. Sometimes, you can tell right away that something is wrong. Other times, you’ll have to use the “Investigate” tools to check out its sources and facts.

In the example above, the story wasn’t a huge red flag. But, using the investigate tools, I realized that the original story included a lot of facts without citations. That’s a reason to flag and remove an article, so I flagged it as containing unverifiable information.

A story can be flagged for a number of reasons. Once you flag it, you’ll see a response from the administrator and you’ll be scored on whether or not you correctly identified the reasons that it was inappropriate.

In this example, I correctly identified two problems. However, I flagged it with a third problem that wasn’t appropriate. This can be a bit tricky, and your students will have to think things through before making a choice if they want to get the highest score.

As you progress through the game, you gain access to new actions. At some point, you can select articles to feature as featured posts. Here you can see the two on the left.

You also have the option to share new articles to the site. If you do, you’ll see three headlines and you need to choose from there. But be careful, because you might accidentally share something untrustworthy and damage your reputation.

Your website has three ratings – integrity, traffic, and focus. Your actions throughout the game impact these ratings.

Once one of the ratings hits 100%, you have the option of ending early. If you continue to play, you’ll automatically end if all three ratings hit 100%. If you don’t make it to the top rating, your game will end after 14 days of play.

Like all iCivics games, there is a basic teacher’s guide. There’s also an expansion pack available, with student handouts and a Powerpoint slide deck. And when you finish the game, you’ll get access to a printable certificate for grading purposes.

The basic teacher’s guide is fairly detailed. There’s a thorough guide to gameplay, along with a handout that summarizes the five rules of the website. There are also some discussion starter questions and extension activity suggestions.

The expansion pack adds a Powerpoint slidedeck and a series of accompanying student handouts. The powerpoint does a good job of introducing the topic and the game to the students.

It also adds in a good deal of information about two problems that aren’t addressed in the game – bots and mirror sites. The Powerpoint includes a number of slides about these two topics, and it provides useful information students would miss if they just played the game.

At the end of the game, your students will receive a score that they can print out (or screenshot) as a certificate. This summarizes everything they did, provides their final rating, and grades the accuracy of their reporting.

There’s some good data in here, and you can get a good idea of how students played the game. For example, if they didn’t do a lot of investigation it could be apparent that they just guessed on what articles to flag and not flag.

What I Liked About NewsFeed Defenders by iCivics

Overall, I liked NewsFeed Defenders and I’d say that I’m a fan of the game. It puts a spotlight on an important issue, and does a fairly good job of modeling good and bad practices for consuming information on social media.

I liked the range of activities that you could complete. From investigating, to commenting, to posting new articles, the different activities all required slightly different skill sets. But each represented a way that a user can help ensure that a website they use is accurate, reliable, and useful.

I liked the fact that the articles had some substance to them, but they didn’t require too much reading. There was a good balance between providing depth to the content and abstracting the process so it didn’t take long to investigate.

Some of the click-baity articles were spot on. They looked just like the crap I see people sharing on Facebook that I wish would go away. Hopefully this is real enough that students can make connections back to their real lives and transfer these skills to some extent.

The task of flagging articles was also complex. While some articles were clearly false and misleading, there were others that were a gray area. I lost points on several articles because I either incorrectly chose an option or I failed to choose one of multiple options. The first time I lost points, this made me slow down and pay closer attention to each article that I flagged.

What I Didn’t Like About NewsFeed Defenders by iCivics

There wasn’t a whole lot here that I didn’t like, but the game wasn’t perfect.

I’ll start with the teacher resources. Although I liked the information in the Powerpoint about bots and mirror sites, it just wasn’t presented well. It was a lot of text packed on to the slides without any pictures. It’s strange, and kind of runs counter to the way everything else is done with iCivics. Definitely needs a redesign.

In terms of the design, this kind of looks like a pretty version of Reddit. When viewed through that lens, the actions you take throughout the game make sense. However, I wonder how many students frequent those kinds of social media sites – compared with things like Snapchat and Instagram. That’s not to say that the skills learned throughout the game aren’t useful, but it calls into question the relevance for some students.

I’m also a little concerned about time. When I played through the game, it took me almost 40 minutes to complete it and I didn’t actually make it through Day 14. I can see how students, taking their time (and/or getting distracted) could easily take more than a full class period to play.

All told, this is a great simulation and an engaging game that you should play with your students. They need to learn about media literacy and about spotting fake and misleading news. There might not be a natural place to put it in your curriculum, but you need to carve out some time to discuss it.

If you’re going to be discussing current events or having your students conduct online research, then this is a great way to introduce them to media literacy early in the year. I would play this in September, debrief it, and refer back to it throughout the year.

I wouldn’t say the game is perfect, but it’s definitely good enough to be useful.

Have you played NewsFeed Defender with your students? If so, how did it go? Leave a comment below, or head over to our Facebook page and drop a comment their.

You can find NewsFeed Defender on iCivics here.

And if you’re looking for other ways to make your civics or social studies class more engaging, check out this post on how to teach government in a fun way.

1 comments on “Review of NewsFeed Defenders, an iCivics Game About Media Literacy”