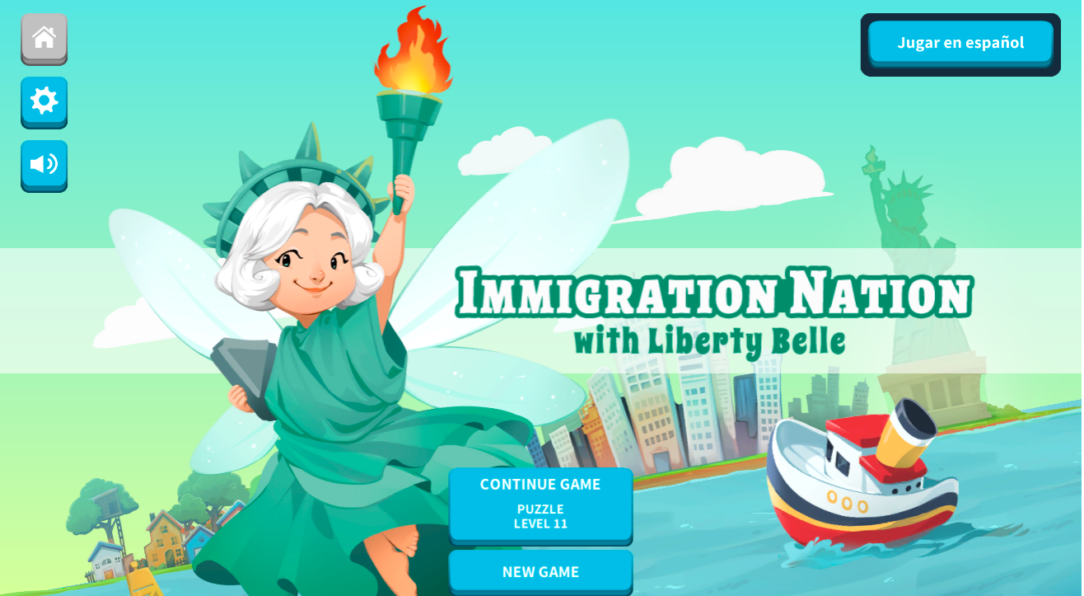 Review of Immigration Nation, a Quick and Simple iCivics Game

By Brian in Games, iCivics
No comments

Immigration Nation is an iCivics game that helps students begin to understand restrictions on immigration to the United States. In this review, we’ll take a look at how to play the game, whether it’s any good or not, and how you might use it in your class to teach civics and government.

It’s quick, and it’s simple. It achieves what it sets out to do – helping students identify and match valid reasons for coming to the United States – but it leaves something to be desired. It could be a fun introductory activity to a larger discussion of immigration, but by itself this game won’t generate too much critical thinking.

Gameplay of Immigration Nation by iCivics

The gameplay in Immigration Nation is pretty simple. You’re presented with a story, and you need to decide whether or not the person has a valid reason for traveling to the United States.

In the screenshot above, the story is about a person who was born in the United States. Therefore, you can let him through. As the game progresses, additional harbors open up and you have to choose between more options.

When you select a harbor to send a person to, a pop-up window appears with a description of that harbor. In this example, I’ve selected to send the person to the “Citizen Parents” harbor. This pop-up window explains the basic criteria for a person to use this as a reason to enter the United States.

If you think you’ve made the right choice, you click “Send,” and watch the boat travel to the harbor.

There will, of course, be people who don’t have valid reasons to enter the country. In that case, you’ll need to choose “Deny Entry” and send them on their way.

In this case, the person enjoyed vacationing in the United States and wanted to live there permanently. That’s not a valid reason for immigration.

As the game progresses, additional harbors open up. You’ll eventually see five harbors, shown above: Seeking Refuge, Born in the USA, Permission to Work, Citizen Parents, and Marriage to a Citizen.

As the game progresses, there will also be additional boats awaiting decisions on each turn.

At the end of the game, there’s a quick citizenship ceremony. Afterwards, a stream of stories scroll across the screen – telling you what happened to people after they traveled to the United States.

And if you want something slightly more challenging, you can choose the “Puzzle Mode.”

In puzzle mode, you have to draw the routes taken by the boats to their appropriate harbors. The harbors and stories remain the same, but this route drawing adds a little complexity.

You can see in the screenshot that obstacles appear in your way. If the boats cross paths, you’ll want to make sure they don’t end up in the same square at the same time. You can also score additional points by taking the shortest possible route.

Like all iCivics games, there are some accompanying teacher resources to Immigration Nation. Immigration Nation also offers an extension pack, with a Powerpoint and student handouts. Finally, when you complete the game you can print a certificate – a useful option for accountability purposes.

The basic teacher’s guide includes learning objectives, an overview of the game, some discussion questions, and some optional activity ideas.

The three learning objectives are to:

The extension pack includes a Powerpoint and a number of handouts that you can use to introduce the game and/or debrief from it. A couple of the activities seemed interesting – including rewriting stories that weren’t correct and imagining stories for people seen in a picture.

The game itself is quick, and you could probably introduce it and play it in one class period. If you complete the full extension pack, you’ll likely need about three class periods.

The certificate (seen above) is fairly simple, but it gives you a way to hold the students accountable. You’ll see the length of gameplay (in my case, nine minutes), the number of each case they dealt with, and how many they got correct.

What I Liked About Immigration Nation by iCivics

The first time I played through Immigration Nation, I thought it was too simple and not of much use. After exploring the teacher resources and replaying it, I think I may have been a little too harsh. But it still leaves something to be desired, and with some tweaks it could be a much better game.

The topic is important, and if you measure it by what it sets out to teach (see the learning objectives above), then I think it hits the mark. It’s a good way to help students identify and remember these five reasons for legal residence in the United States.

On another positive note, the gameplay is straightforward and you shouldn’t have to spend a lot of time explaining how to play or troubleshooting problems. There are good supports in the game for English language learners and struggling readers. If you worry your students might struggle with it, the resources from the extension pack will make sure they’re fully prepared.

Finally, puzzle mode was somewhat more interesting and difficult. I enjoy puzzles, so this appealed to me. There was some strategy involved in planning out the routes, especially in the higher levels, to make sure you got the greatest possible number of points.

What I Didn’t Like About Immigration Nation by iCivics

While there were some good things about Immigration Nation, there were also some places it clearly fell short.

First, the scenarios were overly simplistic and – at times – ludicrous. One scenario, seen in a screenshot above, was a riff off of Gilligan’s Island. There were some scenarios that seemed realistic, but others just seemed silly. I think more the scenarios could have been crafted a little more carefully.

Second, the game was just too easy. Except for a careless mistake where I didn’t fully read the scenario, I didn’t find any that really made me think. It’s pretty much as simple as reading the scenario and then clicking on the appropriate harbor. It’s a fancy matching and sorting game. The mechanics here are a little similar to Do I Have a Right, but for whatever reasons I liked that game a lot better.

The game also neglects some other fairly common possibilities for immigration. For example, there’s an option for a married couple but nothing about a fiancee visa. There’s a harbor for children of U.S. citizens, but there’s nothing about other family members. There’s also nothing about tourist visas and temporary reasons for visiting the United States. I’m sure they made this decision to ensure the game was simple enough and not confusing, but I wonder if they made it too simple.

But perhaps my biggest concern, which I felt immediately after my first play through, was that it makes the immigration process itself seem so simple. I worry that students might play the game and walk away with the feeling that the process always goes smoothly. And, well, that’s just not always the case.

I wasn’t a huge fan of Immigration Nation, but it could be a fun activity to use when discussing immigration. The good news is that the game is quick, so you can introduce it and play it in one day. It’s also very straightforward. You could use it as a homework assignment to either introduce or reinforce basic concepts about immigration.

It does, however, raise the point that immigration is an important issue that should be taught explicitly in social studies classes. It comes up tangentially from time to time, as immigration is a constant topic in American history. But I’ll wager that many history teachers never stop to explicitly teach the valid reasons for residence in the United States.

In that respect, this could be a good activity to use in conjunction with these essential questions about movement. By framing this is part of a broader conversation about immigration, you invite your students to be a bit more critical about what they learn through the game.

Have you played Immigration Nation in your class? Let me know your thoughts below, or head over to the Facebook page and leave a comment there.

You can play Immigration Nation on iCivics here.

And for more ideas on how to make your civics lessons more engaging, check out this post on how to teach government in a fun way.