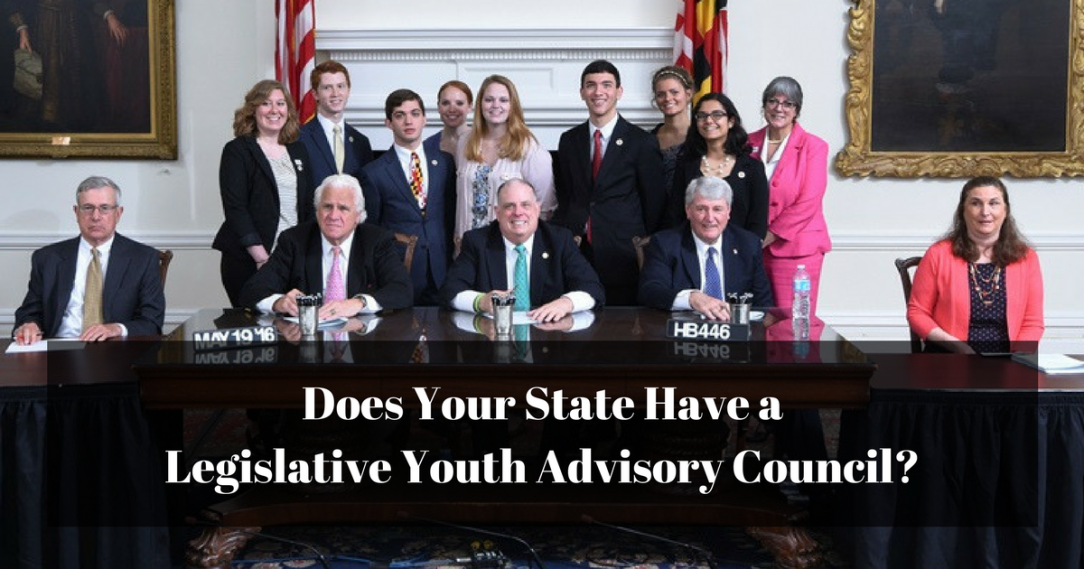 There was one thing in particular in last week’s civic education news round-up that caught my eye: the New Hampshire Legislative Youth Advisory Council and it’s youth forum.

What exactly is this legislative youth advisory council, and are there more like it?

So I thought it was time to dig into this idea a little bit more, and I decided to focus specifically on statewide legislative youth advisory committees. What are they, where do they exist, and what do they do?

What Are Legislative Youth Advisory Councils?

Youth Advisory Committees and Councils can take a variety of forms and structures, but there are certain similarities. In general, a Youth Advisory Council or Committee (YAC) is an organization created underneath a state government office for high school and/or college students to come together and discuss issues that matter to young people in their state.

Typically, these committees hold a certain number of meetings per year and generate an annual report to the Governor or Legislature of their respective state. They likely elect their own leadership and hold legislative sessions to pass bills and resolutions, just like the Legislature does. Membership varies, but the Legislature and Governor themselves often have a role in appointing and selecting these Advisory Committee members.

Essentially, in theory at least, these committees are the voice of young people in their states. They have a seat at the table, and they’re making sure that someone speaks up.

Where do YACs Exist?

These don’t exist in every state and not all YACs are created equally. The National Council for State Legislatures (NCSL) conducted a survey in 2009 and found 12 functioning YACs. They also reported on three bills pending in California, New Jersey, and Pennsylvania.

Although I couldn’t find data for after 2009, that seemed to be a high point for YACs. A number of these were created in 2008 and 2009. When I looked into the New Jersey bill, it died in committee in 2009 and I couldn’t find a similar bill introduced in any subsequent session. So I’m going to assume that the 2009 survey represents all or most of the YACs that exist across the country.

Just for reference, other states with YACs in 2009 include: Alabama, Colorado, Indiana, Iowa, Louisiana, Maine, and Nevada.

In 2009, North Dakota passed a law creating a Youth Council and the Governor made appointments to the Youth Council later that year.

The law provided for a council with 21 members. 16 of the members were young people – aged 17 to 25. The Lieutenant Governor serves as the Chair of the Council, and four legislators are also appointed to serve on the Council. The Governor also created a “Youth Office” within the Department of Commerce.

In terms of membership, the legislators are appointed by the majority and minority leaders of each house. So there’s guaranteed to be some representation from each political party on that level. When it comes to the youth members, though, there are no requirements other than age and residency. While the law directs the Governor to appoint members who represent diverse groups and interests, there are no specific requirements for what that means (i.e. representing certain counties, being nominated by certain legislators). It’s also significant that the Lieutenant Governor serves as the sole chair of the Council without a youth co-chair.

Some of the recommendations and priorities in the report include financial literacy in K-12 education, financial disclosures for student loans, transportation to metro centers, and access to cell service and wi-fi.

Next up, we’ll take a look at the New Mexico Youth Alliance. This was initially created in 2003. The size was fairly massive – 112 members, one representing each legislative district.

The Youth Alliance was created underneath the Children, Youth, and Families Department, and Staff Youth Council Coordinator staffs the alliance. Appointments are officially made by the Coordinator, but these are made in conjunction with a committee of stakeholders in each district. It’s a little unclear how these are formed, but at least there’s supposed to be some community involvement.

It’s a little unclear exactly how the Alliance operated, and there’s little by the way of news about their activities. They appear to have been subsumed at some point under the non-profit New Mexico Forum for Youth in Community. The initial law placed them under a state agency, but all signs point to the Alliance really being run by this non-profit, so I’m assuming a change was made at some point. There was also, apparently, an attempt in 2011 to repeal the Youth Alliance (along with a number of other state commissions and committees). This failed. Washington state also has a YAC, initially created in 2007. The initial law was set to expire in 2009, but it was subsequently re-authorized multiple times.

Washington’s YAC has an interesting structure that is (mostly) bipartisan. It consists of 22 members. 5 are chosen by the Majority caucus in the Senate, 5 by the Majority caucus in the House, and 5 each by the Minority caucuses in the Senate and House. The remaining 2 are chosen by the Governor. This means that the Democratic and Republican party leaders in the Legislature each appoint 10 people, and the Governor appoints two people who might (if there’s a partisan divide) be seen as tie-breakers. No legislators serve as members of the Council.

Aside from submitting an annual report, its duties also include advising the standing committees of the legislature, hosting two public hearings, and hosting a seminar for its members to educate them about the legislative process.

The Washington Legislative YAC has a website and it hosts an annual action day in January in which members attend the legislative session and meet with legislators. It is important to note, though, that the YAC does not apparently receive any more funding from the state. The website states that they are funded solely through contributions and sponsorships.

New Hampshire has had a YAC since 2006. It has 21 members, which must represent the 10 counties of the state. The President of the Senate and the Speaker of the House are each responsible for appointing members as well as the Governor and the Secretary of State

In an interesting twist that’s unrelated to the Youth Advisory Council, the two U.S. Senators and two Congresspersons from New Hampshire are all Democrats. They’re also all women.

Recently, they held a youth forum which gave youth from around the state an opportunity to meet and hear from legislators. They’re also responsible for hosting an annual seminar in August for their own members. They must meet four times a year, and they also have to host two public hearings.

They have a Facebook page, but I could not find an actual website for the New Hampshire YAC.

Finally, we’ll take a look at Maryland’s Youth Advisory Council. This one is interesting because it’s gone through two iterations. It was originally created in 2008, and it was significantly revised and restructured in 2016.

In 2016, the structure was revamped. The size of the YAC was reduced to 24. Of those 24, 12 were political appointments – four each from the Senate, House of Delegates, and Governor. The other twelve came through other student and youth organizations. So while there was no consideration given to the minority party, at least half of the appointments were non-partisan in nature. This restructuring also eliminated the two legislators who served with the Youth Advisory Committee.

The Activities and Make Up of the Maryland YAC

Last year’s annual report from the Maryland Youth Advisory Council offers a glimpse into the things it does. It eight meetings, lobbied the legislature in February, conducted community meetings to gather information about issues, and identified problems that youth across the state were concerned about. In prior year, the Maryland YAC drafted and approved a platform to guide its deliberations in the future.

One final interesting note relates to diversity. Last year’s report includes a brief report on the breakdown of the membership of MYAC. It’s members were 54% female and 46% male.

Questions to Think About With Youth Advisory Councils

Around 20% of the states in the country have some form of Youth Advisory Council or Committee. The diversity of those groups – represented by these five YACs – offer some insights into questions a state might consider if it is going to implement one of these.

How are representatives selected? In the better YACs, there is an application process of some kind. But there are also questions about who does the selecting – the legislature, the Governor’s office, the political parties, or some combination thereof? In New Jersey’s proposed bill, the selection would have been made by the county freeholders. What about democracy – should Representatives be elected by their peers instead of being selected and appointed?

Who do representatives represent? Are they selected at large or are they tied to specific legislative districts? New Mexico was unique in requiring one per legislative district, although New Hampshire does require representation from each county. Is there consideration given to political parties to ensure a diversity of ideological opinion?

How do you ensure diversity? How is outreach conducted to recruit a diverse group of representatives? In places like North Dakota, which is 90% white, how can you ensure some representation of the Native American or African American students in the state?

What does the Council do? How often does it meet? Does it prepare a platform and lobby on bills? Does it just debate priorities and inform the Governor? Does it report to the Governor or to the Legislature? Is it empowered to hold community meetings to gather information?

But Bottom Line – More States Should Have Youth Advisory Councils

I’m not prepared with research to back up the claim that having a youth advisory committee leads to greater civic engagement among youth. I’m going to look around and see if I can find any.

But I have trouble seeing a negative side to this (other than funding). It engages youth directly in government. It ensures that youth voices are heard by legislators and policy makers. It trains the next generation of politicians.

If you ask me, there’s no question that every state should have a Legislative Youth Advisory Council. The only questions are about implementation and how that particular YAC should operate within the unique environment of that state.

What do you think – good idea or no? Does your state have one or do you wish it did? Drop a comment below and let us know.