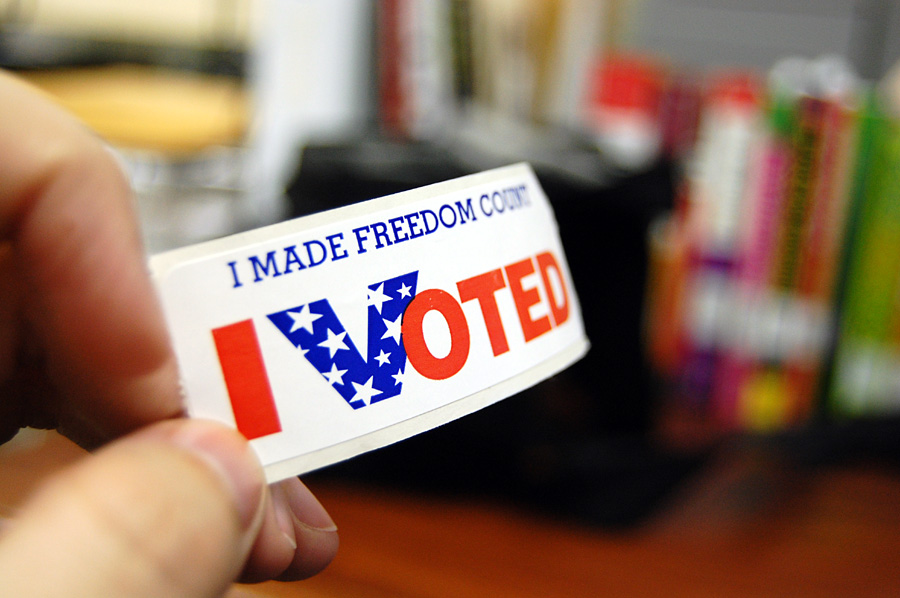 This Week in Civics: Voting Age, We the People, and the Fate of the Civics Testing Initiative

By Brian in Citizenship Test, Voting Age, We the People
No comments

That’s one of the issues in the news this week. Here’s a round-up of civics related items that have cropped up throughout the country.

Besides youth voting, other topics include civics classes in New Hampshire, Libby Liberty in Alabama, a new research institute in Wisconsin, and a final report on the Civics Education Initiative and testing.

Is It Time for Youth Voting in Vermont?

In a letter to the Caledonian Record in Vermont, JC Brimmer describes his daughter’s efforts to create a youth caucus in the Vermont Progressive Party. She is trying to unite youth from across the political spectrum to advocate for one issue – the youth vote.

She suggests dropping the voting age to sixteen or lower. Brimmer provides a unique argument in favor of such a young age – their congregational church. In their Unitarian Universalist Church, the congregation votes on the management of the church. This is similar in many ways to the traditional town meeting structure that forms the basis of New England local government. His daughter can vote in the church, but she can’t vote in local, state, or federal elections.

If youth voting works in the church, why can’t it work statewide or nationwide? It’s not that long ago that the Constitution was changed to drop the voting age to 18. What do you think – is it time to drop it again?

The New Hampshire Union Leader published an article featuring some examples of good civics education throughout the state.

The article mentions that New Hampshire recently passed a law requiring students to take a civics test. In the case of New Hampshire, the local school district can design its own assessment rather than using the USCIS Citizenship Test.

It seems to me that the journalist made an unnecessary connection between the law and these good examples in civics. Notably, the article ignores a subsequent law that added a requirement for an actual civics class – which is more likely to create space for these types of activities.

Regardless, the article highlights some great examples of civics ed throughout the state. Here’s the interesting line in the original Union Leader article:

But the state’s social studies standards haven’t been updated in more than a decade, so civics education is driven at the local level, by individual teachers and schools.

Like I said in this post about Hawaii’s civics education requirements, state policy can only pave the way. It ultimately comes down to school level leadership and teacher buy-in to ensure that students actually experience worthwhile civics education. There was an article in the Opelika-Auburn News about third graders learning to be “super citizens.”

There is apparently an Alabama company, Liberty’s Legacy, that purports to promote civics education throughout the state. They market a series of civics books and video lessons for children, and they appear to put a heavy emphasis on patriotism and pride in country.

There is a mascot of sorts. Libby Liberty is a singing, traveling version of the Statue of Liberty. She visits schools and performs at school assemblies for students.

While I appreciate the concept, I’ve gotta say that I’m a bit skeptical about this one. There is an extra heavy dose of patriotism and love of country embedded in their marketing. While this isn’t bad per se, in the current political climate that’s bound to be a trigger of sorts for some people. Against the backdrop of the NFL protests and the argument over the national anthem, you’ve got to take it with a grain of salt when someone tries to place a huge emphasis on symbols.

But who knows. Maybe it’s a good curriculum… if you have any first hand experience with it, I’d love to hear about it.

New Center for Public Policy and Civics Education in Wisconsin

The Marquette University Law School launched the Lubar Center for Public Policy Research and Civic Education. Tuesday was a half-day conference devoted to one of the Lubar Center’s central projects, the Milwaukee Area Project (MAP).

MAP aims to promote discourse about issues in Milwaukee and collect data to support policy discussions through original research and polling. This sounds like a promising and interesting step for Wisconsin and its higher ed community. Hopefully, there will be some trickle down impact on its K-12 education system.

When I read this, the first thing that came to mind was the Eagleton Institute of Politics at Rutgers University. They also conduct polling on New Jersey public opinion, conduct research on politics and government, and promote youth civic engagement. Finally, the Civics Education Initiative released its final report on its effort to promote civics testing throughout the states. They launched their effort on September 2015, and aimed to introduce and pass legislation requiring a civics test in all 50 states by September 2017.

The goals of the Civics Education Initiative are:

It still boggles my mind how requiring a test is going to achieve these goals. Clearly, these are not educators making these decisions.

According to the report, eight states now require a passing grade on a civics test to graduate. Thankfully, eighteen states introduced legislation and failed to pass it. They must have missed some information in their research, because New Jersey definitely introduced a similar bill and did not pass it.

I like this explanation they give for why this initiative failed in so many states:

Defeat of the legislation primarily reflects a rejection of additional mandated high-stakes testing and concerns over the adequacy of the proposed test to ensure robust civic learning.12 The USCIS naturalization civic test was not designed as a high school civic literacy exam and involves memorizing 100 civic facts, which heightened anxieties that the requirement could drive teaching to the test and set low expectations for development of students’ civic competencies.

Despite a laser focus on the civics testing issue, the report wraps up with three alternative policy areas to consider: skills and disposition (and school climate), content rich curriculum, and teacher training and professional development. Those sound to me like better areas to focus on than requiring a civics test.

Hopefully with the three year initiative over, people can move on to better ideas when it comes to improving civics education.

Those were the big highlights for the week. Did I miss anything? Drop a line in the comments section.