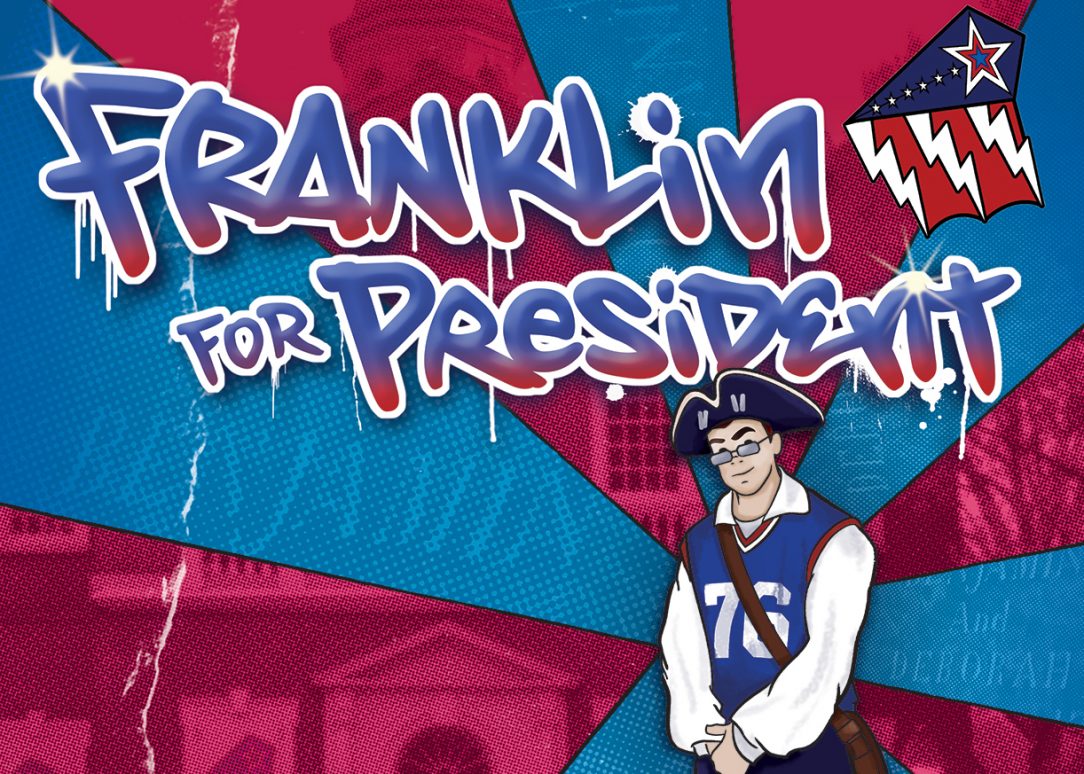 By Brian in Ben Franklin
No comments

Ben Franklin, I’m a God, son
All these rappers pray to me, even Nas one
I transcend my race, I represent green faces
And I’ma make this classroom like Tigga made Tha Basement

And with that I begin the final song of Young Ben Franklin’s inaugural hip-hop mixtape, “Franklin 4 President Vol.1: The Reintro”. That’s right. Rapping Ben Franklin. A young one. Not bald and not fat… yet. (Note: getting old and fat sounds awesome.)

Hi. My name is Chris Kuncio. I teach 11th and 12th grade English at a charter school located in Old City Philadelphia. I am in my 4th year and I’m still very much learning how to be a teacher. It has been an incredible experience. Every day I swallow my pride and second-guess my approach. Each year it gets better, but it remains frustrating, difficult, and exhausting.

I also run a historical walking tour company in the city. It’s called the Philly Official Guide, aka “The Philly O.G.”. I’m essentially a guide-for-hire for various types of tours in Philadelphia. Over the past three years, I’ve developed a new tour where I portray Young Ben Franklin and tell the story of his life. And I do so while rapping throughout it.

If I were a religious/superstitious man, I’d argue that fate brought me to teach at my specific school. The school is located on the same block as Franklin’s old house at Franklin Court. In fact, the wall of my room connects with the wall of the Franklin Museum. It’s corny I know, but this coincidence is pretty special for a nerd like me…

I have brought a whole lot of passion for Ben Franklin into my classroom but, for the most part, I have made minimal impact. My students haven’t learned anything about him yet. This is mostly because I have been so focused on learning how to teach English for the past 4 years. Now that I have a good feel for the subject, I am beginning to create my own lessons tapping into the spirit of Franklin.

My big goal is to create a full curriculum based around two of the major tenants of “Franklinism”: civic education and satire. If I can educate people on Franklin’s civic-oriented philosophy – his motivation to improve society through logic, education, and benevolence – as well as his “out here grindin’” mindset, then maybe I can instill a successful formula for civic improvement into a new generation of Progressive leaders.

When you think of Ben Franklin, you think old, fat, bald guy. The image is uninspiring and, honestly, a little creepy. I want to change that. I want to educate people on the energy and success of the man in his youth. Once people understand his early successes, they will feel more empowered to make their own progressive changes.

He founded the Library at the age of 26. That’s crazy! Pulling off that type of feat takes a certain amount of people skills. He had that. He was actively involved in the community, thanks to his private Enlightenment club, the Junto. Admired across the city, he was charming and intelligent; few people left better first impressions. Business-wise, he was hustlin’ and grindin’ and reaping the rewards. After all, he retired from business at the age of 42.

He was never the greatest writer, but he didn’t need to be because he was already the most entertaining writer. His newspaper, The Pennsylvania Gazette, was as much a source of information as it was a source of humor and wit. Back when writers would hide their names behind pseudonyms, Franklin took advantage of it by creating folksy caricatures; each of whom had a unique perspective and idea. He advanced satire in the American colonies, engaging the people while keeping them informed. Think of his paper as the 1700s version of “Last Week Tonight”. His strength lay in communicating complex theories and ideas into simple explanations so that the common laymen could understand. In other words, he was a great communicator and, more appropriately, the CIVIC EDUCATOR.

So when you consider his portfolio by the age of 30, it is impossible to not feel inspired. Considering the success of his ventures, and his devotion to advancing educational opportunities, it is a surprise that we haven’t made Ben Franklin the patron saint of educators.

Creating an effective curriculum around this youthful spirit of Ben Franklin has been a fun project, requiring me to incorporate into it various subjects like history, political science, self-help strategies, algebra, logic, satire, and poetry…

Hip-Hop in the Classroom

Incorporating hip-hop into my classroom came naturally for me.

From the beginning of teaching I had tried to capitalize on the fact that I also grew up in Philadelphia. I was not from a poor economic neighborhood but I grew up following Philadelphia sports teams and I grew up immersed in hip-hop. I knew that these would immediately provide me with some connections with the students to talk about… and it turns out debate since, unfortunately, my students argue that Jay-Z is not a great rapper.

In my first year of teaching, I tried to utilize hip-hop in the class for students to identify specific writing skills such as literary elements and literary devices. It has continued to develop over the past 3 years. I had them practice identifying character, setting, and conflict through reading Jay-Z’s “D’evils” and Nas’s “NY State of Mind”. We read Tupac’s “Changes” and Meek Mill’s “Dreams and Nightmares” in order to identify the author’s change in tone. Hip-hop (good hip-hop) is just a modern form of poetry. The kids, for the most part appreciated the change of pace. In the end, however, they would have preferred to not have to do any work with it. (Typical…)

I also began rapping for my students in my first year. It was because of a strategy that I learned from Ben Franklin. You see, Franklin had taught himself how to write by using a very simple strategy: convert Enlightenment essays into poetry and then rewrite them back into prose. The poetry developed a rhythm to his writing, as well as a need to learn new vocabulary. So I used this necessity to learn vocabulary as a kick-start for my kids to learn their own vocabulary. Thus, the vocabulary rap challenge was born.

Since my first year of teaching, I have challenged my students to create short-stories or raps incorporating all of the vocabulary words. In order to motivate them, I have written my own. The students appreciate that I do this, though, it has had mixed results in motivating them to actually write their own.

Each class is different with some consisting of students who are self-assured enough to try out their own. When it is a success, with multiple students performing their vocab raps, the class morale really increases… my students are really fucking good. They just haven’t had any outlet to hone their skills.

After seeing the potential for poetry to take off in my school, I signed us up for the spoken word organization, Philly Youth Poetry Movement. PYPM has a league where 25 schools compete every other week in poetry slam competitions. The environment is unbelievable: 300 students sitting in an auditorium actively supporting each poet who goes on stage, regardless if they are incredible or if they bomb. My students have loved it and they have developed so much confidence in their own creativity that the energy has begun to spread throughout the school.

I have tried to keep up the energy by rapping beyond just vocabulary. I began rapping about anything and everything under my alter-ego, Young Ben Franklin. You see, my initial Ben Franklin tour had been pretty “vanilla”. When the Alexander Hamilton Musical became a huge success, I tried to capitalize on it. So I made half my tour told in rap form and called the rap tour “Ben Franklin, Philly’s O.G.” to really emphasize the connection to hip-hop.

In order to generate an interest, I created a mixtape “Franklin for President” and performed it for my kids. Those kids who were actively involved in PYPM became part of my rap group, “Franklin University” and recorded a couple of rap songs for my mixtape.

There is a lot of potential in what I’m trying to accomplish. It’s unique. It’s fresh. It is what we need right now: a new perspective on what it means to be an American. It is equal parts compassion, ambition, wisdom, and benevolence. It could prove to be an effective training tool to help develop innovators and educators alike.

Unfortunately, as every teacher can attest to, there is a big difference between “teacher goals” and “classroom realities”. Everyone has great ideas, but we all run into the struggle of time and resources. I still have a long way to go before I can truly realize my reality.

I have laid two foundations, my hip-hop classroom and my rap tour. As I have continued to elevate those pillars, I have also begun to build the bridge between them.

I look forward to informing you of the progress I make.

Chris Kuncio is a high school teacher in Philadelphia. He runs the Philly O.G. Tour Company (Like him on Facebook!) and you can follow his blog – Franklin for President. Chris is also a graduate of the New Leaders Council Philadelphia fellowship.

And here’s a taste of the young Ben Franklin…