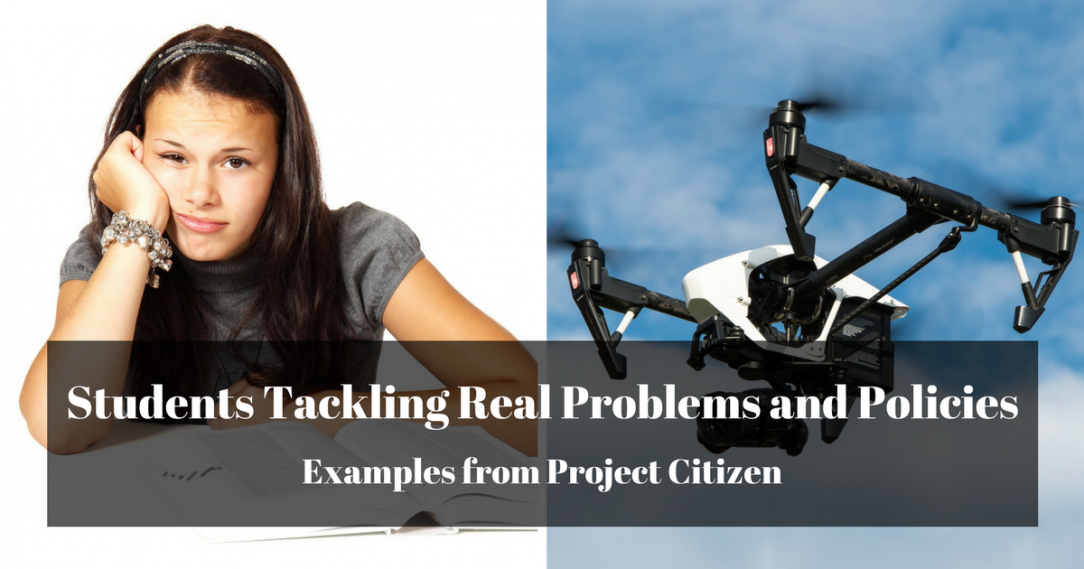 Examples of Project Citizen Winners and Project Based Learning

By Brian in New Jersey, Project Based Learning, Project Citizen
No comments

Project Citizen is a textbook and curriculum designed to help you teach civics through project based learning. You can make it the centerpiece of your civics class or incorporate it as an extended project into a history class.

If you’re not familiar with the program, you can read more about Project Citizen here.

But today I wanted to take a look at some examples of winning projects from statewide project citizen showcases to give you an idea of what students have done through this program. It’s about to be the start of a new semester, and this would be the perfect time to launch the project to carry you through the end of the school year.

The three projects that we’re going to look at are winners from the New Jersey showcase. One is from 2016 and two are from 2017. As part of the project, students have to complete a digital portfolio and that’s what we’ll be looking at. You can take a look at other winners going back to 2012 here.

This first project was a first place winner in 2017, and it was completed by Michael Savino’s class at Ridgefield Park Jr/Sr High. The problem they identified is that student are not getting enough sleep and their academic performance is suffering because of it.

The first group described how they came to choose this topic. They interviewed an adult about problems in the school and community to gather suggestions. They eventually narrowed it down to students’ sleep deprivation and researched the causes and effects of this. They cited research showing that adolescents need about nine hours of sleep each night, and other research showing that an adolescents’ biological clock makes it harder for them to fall asleep before 10 or 11pm. This is also a timely issue in the state of New Jersey, as the Governor had commissioned a Study Group to issue a report on the problem. That report was released in April 2017 (presumably after this group had finished their research).

So what can be done about this problem?

Each of these solutions was presented with a list of pros and cons to consider. They ended up making five specific policy suggestions:

Finally, they reported on their action plan for advocating for change. They sent letters to their legislators and made presentations to local school officials. They reported that the Superintendent indicated that the district’s homework policy would be examined over the summer – a minor success for the team.

Overall, this was an excellent topic and they identified some great research and arguments. But I think the group copped out a bit by identifying five solutions instead of choosing one or two. For example, if they had focused on flipping start times and the homework ban they might have had a more focused presentation and had a greater chance of success with the board. The policy solutions were also a bit vague.

I think this highlights both the strengths and weaknesses of Project Citizen. It’s great for getting kids excited about a topic and researching possible solutions. It’s not always great about teaching them how to narrow things down to a specific policy solution and executing a plan to follow through on that proposal. This is where something like Solutions Civics would be helpful.

The next project was a 2nd place winner in 2017, completed by Sarah David’s class at Florence M. Gaudineer Middle School in Springfield. They dealt with the problem of drones being misused and unregulated.

The first group defined the problem. With new, relatively cheap drones on the market for consumers, their use is increasing. This can lead to three potential problems. They pose a danger to aircraft in the area and a collision with a drone could potentially be catastrophic. Drones can be used to spy on people and invade their privacy. Finally, drones are being used by ISIS in Iraq and Syria, and it’s conceivable that they could be used in a terrorist attack on American soil. They identified some current regulations about drones but argued that they’re insufficient.

They identified four bills that had been introduced on this topic in the New Jersey Legislature. One was passed by the Senate but not the Assembly, requiring the registration of certain drones and forbidding them from flying over certain areas (S-3183). Another one was pocket vetoed, which would have set standards for how law enforcement agencies could use drones (S-2310). Two others died in committee – including one that would have required retailers to post FAA regulations (S-3174) and one creating a no-fly zone within 12 miles of airports (A-4807). They included a pro and con analysis for each of these bills. This is an impressive amount of research for a 7th grade class.

Again, each policy has an analysis of pros and cons. This is a thoughtful list of policies, building on existing proposed policies (i.e. no-fly zones around airports) and offers novel solutions that addresses their stated problems (dangers of using drones and an invasion of privacy).

Their action plan includes a thoughtful list of people to contact to ask for support. They identified sponsors and co-sponsors for the bills they had researched, as well as the heads of related government agencies (like the Port Authority) and corporations that would likely oppose it. This is a great first step and shows a more sophisticated approach to grassroots lobbying than simply contacting local legislators.

The third and final project is a first place winner from 2016, and it was created by Suzanne Ward’s class in Ridge High School in Bernards Township. Their problem is the amount of stress experienced by teens today and the potential problems that can cause.

According to the group, a majority of students at their high school reported being stressed and having anxiety about school. Potential causes for this included a lack of sleep, an excessive amount of homework, and demanding expectations for things like AP classes. They surveyed their school and also provided research from other student populations around the country. Finally, they suggested that the rising rate of teen suicides could be linked to this rising level of stress.

The three policies they selected to advocate for were:

As part of their action plan, they made a presentation to the Board of Education and planned to have more students share testimonials at board meetings. They identified the PTO as a stakeholder group that could help influence policymakers.

What Are Your Students Tackling?

So you see there’s a variety of issues that students can tackle – from local issues like start times and student stress to statewide issues like drone safety. It’s also worth looking at the example projects to put things in perspective. Your students don’t have to be perfect to do a good job or to learn from the process. All of these projects had exceptional qualities, but they also had significant shortcomings in places.

The point of Project Citizen isn’t to change the world – it’s to help students master the skills they’ll need to change the world. It’s always a nice bonus when students have success in changing policies, but that’s not the only barometer for success of the project.

So with the new semester coming up, are you going to be using Project Citizen? What are your students going to work on? Leave a comment below.

If you’re thinking about using Project Citizen but not quite sure, you can read more about how to incorporate it into your class here. And here’s a list of five Project Citizen ideas at the school level that you can use to get your kids started.