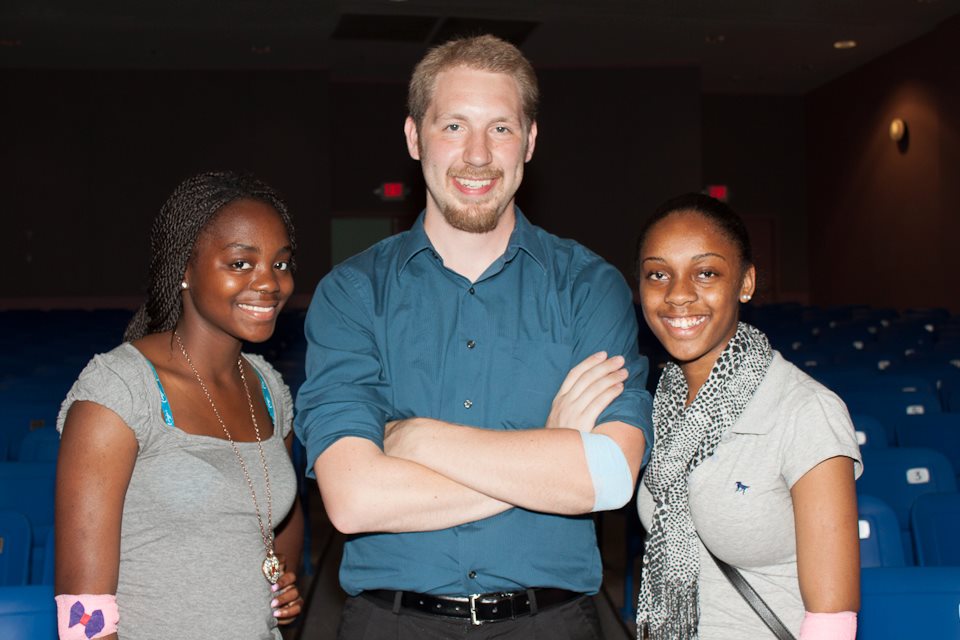 By Brian in Service Learning
No comments

This post is the first one in a recurring series called “Sunday Spotlight.” Every Sunday, we’ll post an article from an educator describing what makes him or her a civic educator. If you’re interested in submitting your own story, we’d love to hear from you. Head over to the Submission Guideline and use the form to submit what you’d like to share. We’ll get back to you soon.

My first day at East Orange Campus High School, there was a note in my box. The vice principal wanted to see me.

No, I wasn’t in trouble. She wanted me to volunteer for something. This tactic should come as no surprise to the veterans out there: target the newcomers.

But when she told me her request, I was interested. At the time, our school had an after school club called Peer Leadership. Juniors and seniors were trained in facilitating activities for our sophomores (we didn’t have freshmen in the school at the time). The program was designed to help the underclassmen better adjust to life in high school.

I accepted her request to help out, and after that first year I spent the next two as the official club advisor. The club was eliminated, but a few years later we implemented a course, Peer Group Connections, that was based off a similar premise. I enjoyed teaching the class for two years until, unfortunately, it was eliminated (presumably for budgetary reasons).

Regardless, that’s not the story I want to tell today about being a civic educator. The story I do want to tell has to do with service learning – and hosting a blood drive.

Bringing a Blood Drive Back to East Orange

Partway through that first year, the assistant principal asked us to think of ways that we could incorporate community service into Peer Leadership. We floated a bunch of ideas, and mine was simple: host a blood drive at East Orange Campus High School.

I’ve been a blood donor throughout my adult life, and I can easily point to the experience that got me started. When I was a student at Edison High School, we had a blood drive. I donated, and that simple act started a habit that has lasted fifteen years.

When I made the suggestion, some people thought I was crazy. There were definitely a few doubters. But there were supporters as well, and I decided to check into the logistics.

As luck turned out, we actually had a blood center in East Orange (it has since merged with Community Blood Services). It was about a mile from the school. They were more than happy to come out and run a blood drive for us, and I was a bit surprised when my contact told me it had been a decade or two since the schools had last held a blood drive.

That first year was an interesting experience. Logistically, we weren’t sure where to hold it and we ended up setting up in the lobby outside the auditorium. The half dozen beds, nurses stations, and snacks left the room quite crowded.

A committee of students helped me organize the event. They made announcements, hung posters around the school, and visited homerooms to recruit donors. It was interesting to hear the other students’ responses. Some were completely turned off by the idea. I chuckled every time I saw an oversized teenage football player who was terrified of needles. Meanwhile others were begging to participate. Some of the smaller girls were trying to fudge their weight so that they could meet the requirement.

At the end of the day, it was a success. I don’t remember how many people registered to donate, but I do remember the excitement with which some of them gave. We went on to host a blood drive the next year, and the year after that. It’s ten years later, and now we’re hosting one in the winter and one in the spring. And it never ceases to amaze me when we start to make the announcement and kids come to find me and ask how they can participate. While it may not seem like traditional “civics”, this type of service learning is a critical component of a good civic education.

Why? Because civics isn’t just the nuts and bolts of politics, it’s also character education. Specifically, good citizens have to develop certain attitudes and dispositions. They also need certain skills to engage in deliberation and civic discourse.

In this case, it’s about empathy. We live in a democratic society, and one of the dangers of participatory democracy is the tyranny of the majority. If people have no empathy for their fellow citizens, if they are strictly selfish, then the whole system begins to buckle. Sure, you can build in some safeguards to protect the rights of the minority. But at the end of the day there will always be some things left to political decisions.

Asking a student to donate blood – or to give anything of value in service of a project to benefit others – is asking them to empathize with that other person. I can’t force everyone to participate, but I can at least give everyone the opportunity. Hopefully, when these students grow up they will continue to be blood donors. And hopefully they will also be able to empathize better with their fellow citizens.

Brian Rock is a social studies teacher at East Orange Campus High School in East Orange, NJ. He is a leader in a variety of roles with the New Jersey Education Association, and he is the Institute Co-chair for New Leaders Council NJ. He is a passionate supporter of civics education and writes about the topic on The Civic Educator. You can connect with him on LinkedIn and Twitter.

Want to tell your own story of what makes you a civic educator? Head over to the Submission Guidelines and let us know.